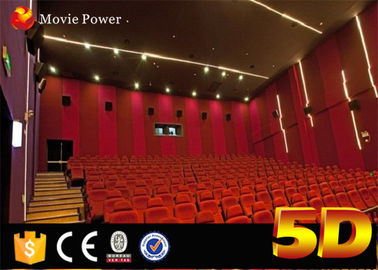 How to Play 4D Movie Theatre?

What is 4D 5D Movie Theatre

5D Movie Theatre is the most popular cinema in nowadays market. It’s upgraded on normal 3D cinema by adding special effects and motional chairs. It gives audience not only 3D visual but also motions and special effects. It’s including more than 10 special effects, such as rain, wind, bubble, snow, fire, smoke, lightning, bubble, leg sweep, vibration, back push, ect. Audience will be crazy about this 5D cinema with its 100% synchronized motion seats and vivid special effects. It brings audience to a real world.

With the ability to developing, will keep update about 10 pieces within one year. Also, if you have new 3D movie, we can help to program the motion and special effects on it.

The main difference between 4D cinema and 3D format, in particular, is that 3D lies in visual effects experienced by the audience while watching a movie. Using 4D equipment gives the opportunity to involve not only sight and hearing but other organs of human senses such as touch and smell, even lost gravity!

1. Offer installation on site for free;

4. Offer 1 year warranty for hardware, and lifetime for software;