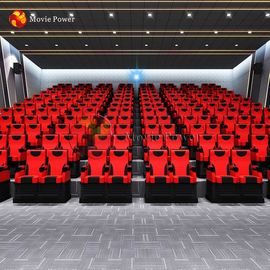 4D Cinema, also known as four-dimensional film, is a new concept, new technology, but also for ordinary cinemas and 3D cinemas after the further transformation and upgrading of the product.
D in 3D stereo film on the basis of the addition of vibration, wind, rain, lightning and other special effects, so that the experience in watching 4D film can get audio-visual sniffing and other all-round feelings, and create an immersive, thrilling feeling. The United States was the first country to experience 4D movies, such as Spider-Man, leap California and so on, all using the way of 4D movies. With the wide application of three-dimensional software in the production of stereo film, 4D film in the domestic has also been rapid development, screen effect and field stunt production level has made great progress, has been in Shenzhen, Guangzhou, Shanghai, Beijing, Chengdu and other places in the emergence of dozens of 4D cinemas.
Most of these cinemas appear in a variety of theme parks, popular science venues, deeply loved by the experience

Movie Power is the creator of immersive experience, major in development of hardware and software, production and sales of “4D theme cinema and Virtual imaging products”. Focus on providing the most valuable immersive experience products and solutions to indoor playground, amusement park, cultural tourism, popular science and other industries.
Product including 4D Dynamic Cinema, 4D Ocean Theater, VR Cinema, Dome Cinema, and Virtual imaging products.
As a high-tech enterprise, Movie Power has won a number of invention patents, utility model patents, appearance patents, software copyrights, and CE, ROHS certifications, etc. With an industrial park of more than 10,000 square meters, the 5S production workshop is well organized, and the ISO9000 management system is an effective guarantee of quality.
Movie Power has a R&D Team of more than 50 people, whose technologies cover film content creation, dynamic motion effects, and Acousto-optic. It has been adhering to the spirit of excellence in craftsmanship for over years, continue to create immersive experience and value for customers.
Movie Power is the first in the industry to establish a 24-hour after-sales service system. It has solved the jet lag problem and maintenance issue for global customers, making business operation easier.