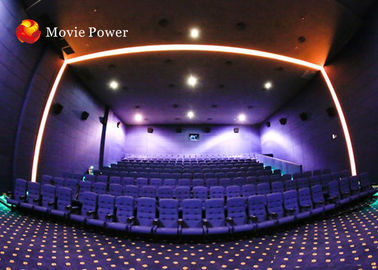 4D film is also called the four dimensions, by three-dimensional film and the surrounding environment simulation of four dimensional space, it is on the basis of 3D movie and environmental effects, simulation of new film and television products, through to the audience to film content of physical stimuli, to enhance telepresence effect. When the audience watching the 3D movie, follow the change of the film and television content, it can feel the storm, thunder, rain, impact, spraying water mist around and shoot the legs, and stereo image matching what is happening in 4DM seat is a water spray, jet, vibration, and legs.

The functions, such as by pneumatic power. Environment simulation is refers to the snow, rain and lightning are installed in the theater, smoke, and other special equipment, create a consistent with the content of the environment. Above two kinds of films have, as it were, the effect of the adventure. These two films has both commonness, and personality. In the mirror, adventure, feel is their common science and technology; One is feeling in motion, one is in the visual feelings stimulate, that is its personality.