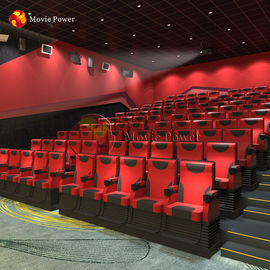 The 4D motion chairs have features such as water, jet, vibration, leg sweep. Environmental simulation theater with the snow, rain, lightning, smoke and other special effects equipment inside, and create a consistent environment of a video content, immersive and thrilling effect. Audience can feel the visual impact. Compared to other types of cinema, with a prominent theme, high technology, realistic effects, entertainment and other features and advantages.

4D cinema, is made of by three-dimensional film and the surrounding environment simulation which called four-dimensional space. It is based on 3d movie then adds special effects, new video products formed in the simulation, trough linkage to the audience and movie content to stimulate or enhance the immersive effect. When the audience to see the stereoscopic film, along with the film and television content change, they will real-time feel the storm, lightning, rain, vibration, spray ,leg sweep and so on functions, cooperate with the three-dimensional image.

4D DYNAMIC CINEMA APPLICATION
Movie Power can customize cinema with different themes according to different customer and business place. Such as Ocean, Earthquake and Popular Science Theme Cinema for indoor playground, amusement park, and so on. The seats number could be customized from 20-200 seats.

As a national high-tech enterprise, Movie Power has its own R & D center, a modern production park of more than 10,000 square meters, and an annual output of more than 5,000 VR and cinema products. And become the only manufacturer in the industry to support global 24-hour after-sales service. Products are exported to more than 30 countries and regions in the world such as Europe, America and the Middle East.

Product Warranty
A. We offer 1years’ factory warranty.
B. We will provide 24 hours online support.
C. We will supply key parts induced by non-human factors.
D. Technical support for a whole lifetime!
E. We will give you operation advice all the time.