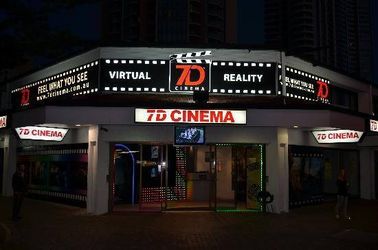 8d cinema system is made of by three-dimensional film(3D Movies) and the surrounding environment simulation which called four-dimensional space. It is based on 3d movie then adds special effects, new video products formed in the simulation, trough linkage to the audience and movie content to stimulate or enhance the immersive effect. When the audience to see the stereoscopic film, along with the film and television content change, they will real-time feel the storm, lightning, rain, vibration, spray ,leg sweep and so on functions, cooperate with the three-dimensional image.

• Lightning: When the movie screen shots when there is thunder and lightning, cinema hall will issue a dazzling lightning, accompanied by the roar of lightning, so that the audience feel like being at the height of summer thunderstorm days.

• Rain: When the film for a rainy pictures, showing the slightest fear of stirring up the hall Xindy, which is installed in the hall on top of the spray device consists of computer controlled to complete, the audience will truly feel at this time rain fall from the sky, moist his hair and cheeks.

• Snow: Snowflake function efficiently and quickly to manmade snow Feifei triumphantly sky drift down the screen from top to bottom with snow,indoor snow under. Snow on the screen and indoor snow mixed one, a sudden exposure to the audience will be wrapped in silver makeup Su's world.

• Smoke: Simulate a large number of burning smoke, smoke arises accompanied by "flames" as if the sky in the combustion. Simulated mist shrouded, curl between clouds dance in the audience.

•Bubble : Generated bubbles filled the air of the real. Quest in the undersea world and underwater, the divers, aquatic plants and animals due to the role of metabolism, will spit out a number of air bubbles from the bubble machine blowing bubbles in the theater of the drift, alienation between the audience and the theater every corner of the make theater in the vivacious atmosphere of mystery.

• Vibration: In the seat is installed below a motor and eccentric wheel to generate the exciting force of about 12Hz to seat vibration. When the movie screen, an object lens and lens impact or landing such scenarios, the instantaneous seat vibration make the audience feel as if being in a virtual reality.

• Jet : Our company developed dynamic 4D seats right and left sides each have a set of fog, gas nozzle, simulation from the audience in front of the air, breeze.

1. We can provide a professional design for cinema overall layout,special effects equipment installation figure and circuit line figure according to your space size.
2. We can offer for free service such as,cabin design,advertisement or experienced marketing planning for you.
3. We offer you the professional installation guid video or dispatch our technician to your location to help you install the cinema.
4. We offer you the professional 4D/5D movies which do it by us for free, because we have our own technician to update the 3D movies.
5. We can offer every customer qualitative after-sale service on 24 hour.