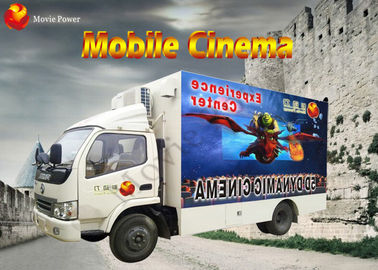 1. What's 7d mobile cinema:
7d cinema means interactive cinema, it’s the upgrading version for 5d cinema. It has unique interactive shooting system, the simulating special effects and dynamic effects at the same time. The most important point is the audience can play games with the 7D shooting gun when they watching 5D movie. It’s the new stimulation for games lovers.
The interactive cinema, it not only play 7D movie, also can play 3D, 4D, 5D movie.Choose 7D, means you choose one multifunction theater, it can help you to realize profit maximization! There is no reason for being unsuccessful!

Seat system: since it is developed with 6 DOF design, it can provide a dynamic effect with 12 directions, 36 combination and 72 motions.
Screen display system: professional metal screen for stereo cinemas, it can effectively resist the interference of the ambient light , and the working life is very long.

Central control system: the main part of this system is control software, it can make all the equipment as a whole 5D cinema by effectively control movie’s display, dynamic seats, effect equipment, sound equipment.

Sound system: the sound equipment we provide is 5.1 sound track , the most highest level sound equipment used for cinemas.
Special effect system:
Water spray effect
When it rains in the film, it rains outside. Water spray effect is a special effect equipment to create raining scene.
Bubble effect
Travel undersea or in a fantastic forest, bubbles will be spited out from bubble machine and filled the room.
Leg tickling effect
Simulates insects and arthropod creeping on your leg.
Strobe lighting effect
With thrilling scene and extreme weather, audience will be scared by unexpected stunning lightning, just like the theater is involved in a thunderstorm.
Blowing wind effect
Is there any better effect than a chilly wind when you are focusing on a horror film, or a fierce wind when you are taking an adventure in the forest? Wind effect shows a direct feeling you expect on the movie.
Smoke effect
Imitate a large number of burning smoke, smoke arises accompanied by "flames" as if the sky in the combustion.
Snow effect
Actually we offer many films with the theme “SNOW”. Snow effect works really well. It’s fun and fascinated, create a emulational atmospher.

4. Why Choos 7d mobile cinema?
1. Dynamic seats move according to the film story. It is non-pollution, safe and reliable, there are safe belt and armrest on it.
2. Dynamic seats can go up and down, pitch, and swing. It is reliable. The over-all structure is durable inuse, the designed fixed number of year is 10years
3. The seat material is a special antiseptic material, which can effectively kill several kinds of harmful bacteria.
4. 7D Motion Seats are subject to settlement, vibration, touch legs, jet, spray, ear the wind, ears and other sound effects functions; theater accommodated within the snow, bubbles, precipitation, lightning and other special effects devices. The above equipment in accordance with the contents of the film and make the corresponding simulated responses, increasing the audience into the immersive sense of excitement. (Special effects equipment can be made according to customer requirements increase or decrease accordingly).