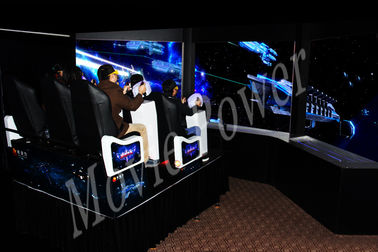 Movie Power.The game is dominated by crazy storyline,players need to shoot the target interactively to

complete the task together,in the end of success,the screen will show a list of individual performance

shock and surprise you!

creating a intensive and mysterious playing atmosphere.There are also some LED strips and acrylic back printing lamp on the external surface of the frame,making a bright and colorful exterior.We also can

control the curtain on both side of the entrance up and down conveniently by a remote controller.

2. Wraparound screen projection,naked eye 3D efficiency. Another characteristic of this game machine:Without wearing a 3D glasses,players can also experience a realistic game scene by a wraparound screen combined with 3 HD projectors.Be careful!not your teammates around you,but the monsters in the Galactic! 7d cinema simulator

3. Multiple LED display screens,wonderful game shows both inside and outside.There is a 47” LED monitor set beside the main entrance,being used to show safety instruction and game introduction.Two 32” LED monitor set on the back wall are each display the demo play of the game and the ranking of the players.This design can attract the bystanders outside,who can also fall into the game ,maybe he is the next player!

4. Motion efficiency with hightechnology.The motion seat with 6 shafts shake in step with the game story,making player in a real  world.Shocking acoustics is generated by a surround sound played by stereo equipment with high quality.What’s more,every sensitive shooting light gun is numbered same with the matching seat,players can easily identify his shooting point on the screen.

5. Auto settings,easy operation.Beside the manageable curtain,the step is also controlled by the console.When the players walk up to the seat to start a game,we can extend the step,making it seamlessly merge with the seat platform,this ensures the player enter the game zone safely.Before the game start,the step