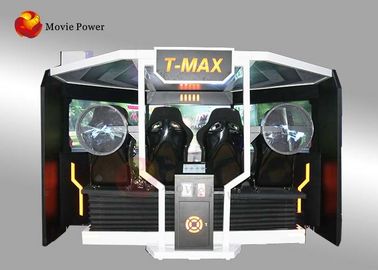 5D T-MAX
The world's first ultra-simulated VR stereo interactive shooting theater, VR virtual reality is not just a head-mounted device, head-mounted devices are just one of them, and T-MAX can be said to be another form of VR. Walk into the T-MAX theater, wear 3D glasses, space hegemony, earth exploration, unreal simulation, the game can interact with the player in real time, the dynamic seat adapts to accurately position the shooting gun, has the visual effect that makes the player at your fingertips.The film-level picture quality is immersive, the exciting shooting interaction, the three-degree-of-freedom all-around motion and other special effects.

Gameplay:
Players need to sit on the dynamic platform before the game starts and fasten the seat belt.After the game starts, just operate the full simulation of the dynamic flash machine gun in front of you, aiming the cursor at the monster, and the four buttons on the handle can trigger the machine gun to launch.

Base on 5S standard, the 10,000 square meters production area is in good order. ISO9000 management system certification not only is an effective guarantee of quality, but also to achieve an annual output production of 3,000pcs VR simulators and 2000pcs 4D dynamic cinema. All products are fully inspected from raw materials, accessories, assembly, inspection and testing. Especially the 72 hours uninterrupted life-cycle test before shipment.