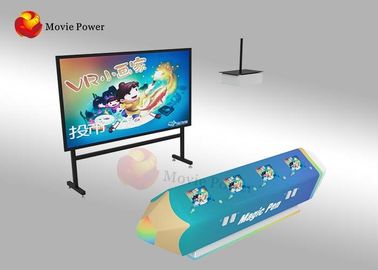 Ever wanted to see your extraordinary illustrations of, say, a great white shark, adorable clownfish that looks a lot like Nemo, or an eight-legged sea creature jump off the page and swim around in a whole new world?

The Magic wall system allows children to express their creativity in an open and highly collaborative environment.

1.Painted fish: Children can choose the fish they like in the album, and change the color of the fish through different painting tools and colors, making it becomes a unique fish.

2.Released fish: After completion, the painted fish was released from the drawing board into the 3D fish pond. At this time, the fish was given a new life and began to swim freely in the large screen of the ocean.

3.Interactive painting fish: Then start Play Time! If you want your fish to grow up quickly, children must fight for food in the ocean by turning the joystick to control the direction.If it eats the right food, the fish will grow up quickly, and if it eats the wrong food, the fish will be poisoned. After poisoning, you must bring your own fish to find medicines in the ocean which can cure your fish.By the way, continuous crazy tapping of the accelerator button can also accelerate the swimming of fish to compete for food and medicine.

(1) Magic sea can exercise the color perception of children and turn on the curiosity to nature and simulate inspirations of creation.
(2)Not only can train children's practical ability, but also for the childlike innocence of the creation of good memories.
(3)There are two forms of selection: one is the scanning form , the other is touch slip type.