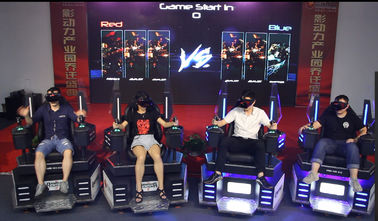 robot battle is a competitive product, it supports six people online at the same time, the three roles to choose, 3v3 mode, the screen can be broadcast real-time status, wonderful picture can often attract the attention of many pedestrians.Movie Power vr robot battle is unique design in the market, it used the world's top position technology, achieving millimeter level identification without delay. and can map the real movements of player and teammate to the virtual scene.

Besides, it is also the first VR equipment that can support multiplayer online interactive games in the domestic and even all over the world.Not only watch the robot battle, but also can play the interactive game.

In the virtual reality world, fighting alone is not a wise choice. Now you can fight with four or more person together.

The best platoon which is breakthrough the gaming way is more exciting and enjoyab;e .