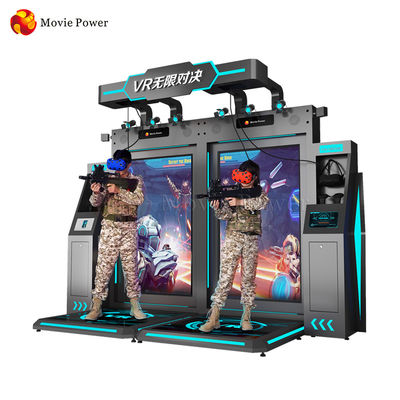 Military shooters can't miss the annual show! The main multiplayer collaboration, interactive, can experience super PVP warfare, shooting zombies, Jurassic dinosaur wars and other multi-theme games.The game can achieve 4VS4 combat mode, play with your friends, team battles, competitive rankings, and burn your fighting soul! It can be used as an entertainment, e-sports and military science experience to the masses, and can be used in the military industry and military training. For military fans, weapon fans, and the general public, the protagonist, panoramic view, extremely realistic and spectacular VR military shooting experience has great appeal.

A strong competitive shooting VR game played by 2 people. The game has a very high confrontational intensity throughout the game. The players are divided into attackers and defenders. The goal of the attackers is to break all defense points. Break through the final defense point.
Attacks can accumulate energy bars to release missiles and cause huge damage. Both the offensive and defensive sides need to make a balance and choice between killing the enemy and attacking obstacles / zombies. The goal is to determine the winner within 10 minutes!

In the hospital corridor, isolated and helpless, countless monsters will surge like tide. All living creatures appearing in front of you are your enemies. Don't show mercy, shoot them immediately. Attacking the monster's head will destroy them more quickly. Watch out for the monsters from both sides of the corridor, they will suddenly appear in front of you, be alert at all times. Some monsters have flames on them, and they will suddenly take off. Please start firing before they jump, otherwise it will be too late. If there are too many monsters, it is too late to destroy them. Attacking the blue oxygen cylinder in the corridor can kill a lot of monsters and quickly clear the siege.

1. It can 4VS4 combat, both cooperative and PK battle
2. Experience freedom, spatial positioning technology, spatial displacement and motion recognition
3. Really restored design, intelligent sensor gun, infrared proofreading, high sensitivity
4. Simple operation, easy to get started and play, gun down and lift up to switch bullets
5. Highly playable and sticky, equipped with the "Infinite War" shooting game to satisfy the stimuli and surprises pursued by the players

Over the past 11 years, it has gained more than 60 patents of invention, utility model, product design, software copyright registration certificate, CE export, ROHS and etc.

Customers from 30 countries and 5 regions, our company has more than 400 dynamic cinemas and more than 1,000 VR offline domestic and international cinemas and large theme parks.The company has the full industry chain service capability, providing customers with one-stop VR entertainment profit plan for strategy, installation and operation. Movie Power is looking forward to cooperating with you to create a bright future in the field of VR•5D motion technology!