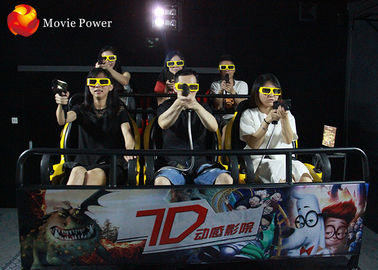 7D is a cinema with interactive games. 7D game is an upgraded industry basic on 5D technology composed of three-dimensional film and surrounding environment simulation. 7D theaters have high technology, prominent theme, and effective strong impact on the screen features compared to other types of theaters.

You need to play the role in the game with a gun. Just shooting the monsters to get the final destination. 7D technology with guns for viewer to shoot ghost, skeleton, warplane, tank, dinosaurs, ... Viewer feel like to be a person in the movies, fighting for their life in dark world.

7D movie theater cinema screens in the six surrounding the circular form, this can greatly enhance the visual impact. The original 3D cinema screen were simply a video player, and 7D Cinema Play 360 places. Long Cheng Electronics 7D cinema broke through the object motion 3D cinema limitations, get rid of the shackles of the visual plane, make video space and real space closer, and may generate cross, surrounded by a variety of movement.

The dynamic seats will move across to the scene of the movies,can go left,right,up,down,forwarder backwarder,spin,fly.

Lighting simulation
The lighting machine will work when there has scene of thunderbolt, issue a dazzling lightning, and accompanied by the roar of lightning, so that audiences feel like being at the thunderstorm days.

Rain simulation
The raining machine will be switch on when there has scene of raining in the movies, audiences will feel truly about rain fall from the sky, moist his hair and cheeks.

River/waterfall simulation
The raining machine will be switch on when there has scene of river, waterfall in the movies, audiences will feel truly about water currounding them.

Bubble simulation
Bubbles created by bubble machine will go up to the sky and fill the room.When the scene of the undersea world cames, frogman or animals will bring a lot of bubbles,at this time the bubble machine will work and the mysterious place the cinema will be turned to.

Snow simulation
The snowflake machine will produce snow full in the sky quickly when there has scene of snow falling
in the movies.The snow in the movies and in the air will be mixed,audience will have a real feeling of snow and can catch it by your hands.

Wind simulation
Simulate the scene of wind blown when there have wind in the movies,the wind machine can create the motion of airflow,audience can have the real feeling of the wind on their face.

Ear wind simulation
Simulate the scene of ear wind blown when there have wind in the movies,the wind machine can create the motion of airflow,audience can have the real feeling of the wind from their ear. . omnibearing feeling.

Back shake
Simulate the scene of back shake when there have shake in the movies. The shaker inside the seat will creat the motion of shake on back, audience can have the back shake feeling from their back.

Buttock shake
Simulate the scene of buttock shake when there have shake in the movies. The shaker inside the seat will creat the motion of shake on buttock, audience can have the buttock shake feeling from their buttock

Flower smell simulation
When the scene comes to a pictures with flowers the smell machine will set off the flower smell,audience can feel in the front of real flowers.We have many kind of smell for you to choose.

Leg sweep
When the scene of bird and other animal fly fhrough the people, the leg sweep machine will creat the creeping feeling, viewers will feel the animal real creep through their leg.

Smoke simulation
The smoke will come out at the first time when there has the scene of smoke in the movies,throw audience to a place full filled with cloud and mist.The smoke will be 100% safe, odourless and poisonless.

How is the profit of 7D movie theater?